The sight of a solitary fairy chimney rising over barren terrain had a startling effect on us. “Stop!” we shouted at the driver of our car. We had to step out and admire this strange apparition, photograph it and give ourselves time to experience the wow it inspired in us.

But there’s an entire Valley of Fairy Chimneys, a few kilometres ahead, our driver explained. “Please stop now!” Like stubborn brats, we were determined to have our way. The vehicle pulled up on the shoulder of the road and we jumped out and trotted up to get a closer look to this bizarre natural formation.

Over the next few days, we would be bedazzled by nature’s brilliant yet wacky handiwork scattered all over Cappadocia, a region in the heart of Turkey that includes the provinces of Aksaray, Nevsehir, Nigde, Kayseri and Kirsehir. But the vision of this lonely sculpture was etched in our mind’s eye like that of our first love.

Cappadocia – the Valley of Fairy Chimneys

But then, we are wayward lovers, easily wooed by the many charms of a land dotted with eye-catching beauties. We found ourselves whirling around with wonderment when gazing at the statue-like formations in the Valley of Fairy Chimneys. Many were pockmarked with doorways and windows that betrayed the fact that, at some point in time, they served as living quarters. We even stumbled upon some that were converted into churches by the early Christians.

Cappadocia – a natural castle towers over a little town

There were more open-air art galleries filled with sculptures fashioned by the elements. With a little imagination, the exhibits started to take recognizable shapes and forms. There was a humped camel, an eagle perched on a pinnacle, Napoleon’s hat… One even resembled the silhouette of the Madonna. 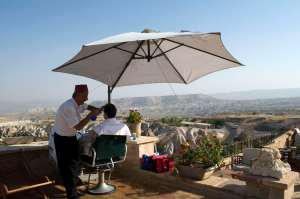 Museum Hotel – this traditional Turkish haircut comes with a view

That evening we checked into a cave in the little town of Uchisar: a boutique hostelry called Museum Hotel. Every corner of the hotel – rooms, passageways, public areas – was decorated with genuine antiques and hence the name Museum Hotel. And every morning, a barber in a red fez cap, would stop by to give guests traditional Turkish haircuts – head massage included – on a sun deck that looked out at hot air balloons as they floated across the valley.

Cappadocia – a road carves its way around Fairy Chimneys

We climbed into a basket attached to one of these enormous textile domes that studded the pre-dawn sky. Below us the earth heaved, thrusting phallic-like projections at us. As the first rays of the rising sun peeked over the eastern horizon, the world around us was awash in startling colours and shapes: brilliantly-hued balloons drifting over a landscape that that could have been conceived by the fervid imagination of a science fiction illustrator.

The pilot of our craft navigated the cross winds and soft landed briefly in an amphitheatre of cigar-like projections before soaring up into the sky once more. It was like flying over a wonderland on a magic carpet.

Talking about magic carpets – Turkish Airlines is the way to go. Read all about our first class experience tomorrow.