Lucy, her velvet coat of white with licks of brown glowing in the sun, chose to ignore us. She bounded out from the back of a pickup van and set off to explore the open patch of land that basked under the gaze of the little town that that graced a ridge of the Langhe Hills in the Piedmont region of northwest Italy. She was all business, sniffing around the perimeters of the surrounding vineyards and the floorboards of a little barn tucked away in one corner. Occasionally, she would stop and check to see if we were watching her. But of course we were: she was the star attraction of the truffle hunt that we were about to embark upon.

A helping hand is always welcome

Truffles are wild mushrooms but with one significant difference: they grow underground and are hard to find. That’s where dogs like Lucy come into the equation as they are the ones that sniff out the buried treasures for a little reward from the truffle hunter; Gianni Monchiero, in Lucy’s case. The reward can be a pat on the head, a hug and must include a nibble of her favourite snack. And it must be given unconditionally and quickly or Lucy might consider the truffle as her prize and gobble it which, Monchiero informed us, was a very expensive proposition; given that the fungi can fetch anything up to 350 Euro for 100 grams (or around Rs 2 lakh per kilo) in the open market. 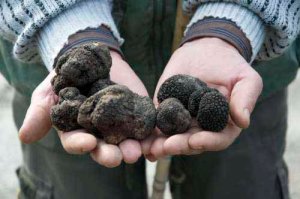 Monchiero launched into a detailed narrative about truffles; that they are generally found near the roots of trees and they have different names (complex Italian tongue twisters that we promptly forgot) depending on the time of the year that they are harvested. The white truffle is the most prized and the black one less so. He dug into the pocket of his well-worn jacket and held out a few samples that he had collected earlier that morning for us to admire in his cupped hand. We photographed the pimpled black offerings which were held out as though they were forbidden fruit and marveled at the fact that something so ugly could cost so much. 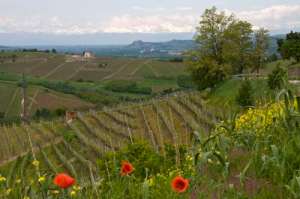 By now Lucy was done with scouting the area and trotted up to reclaim the spotlight. Friendly and playful, she delighted in letting us pet her. A few stern words from her master reminded her that she was a working dog and she went scouting around the territory once more, impatient to get on with the actual hunt and the treats that came with it. Lucy had been sent to the truffle hunting school for 15 days when she was on the cusp of being a pup and adolescent dog. Another three years on the job and she graduated into being an expert truffle hunter. They use pigs in France, Monchiero sniffed. They are good, he conceded, but do not score like Lucy did in the love and companionship category.

The preambles over, we set off on the truffle hunt in earnest… and ran straight into a sticky hazard. Overnight rains had transformed the land into a soggy bog and great lumps of clay clung to our shoes like grasping snares. Each step was an effort as we trudged through a vineyard that carpeted the land in neat geometrical patterns. Once we learned to ignore the discomfort, we lifted our gaze from our grimy footwear and started to appreciate the picture-postcard landscape that Lucy led us through.

Play misty for me

As we approached the banks of a languid river, the vineyards dissolved into a mysterious oak forest painted in every imaginable shade of green. The sight of picnic benches and tables laid out in shady nooks, the slash of a blue river, and the rich musty aroma of a living forest… We almost forgot that we were on a truffle hunt. Lucy, however, was on the ball; this was her turf and she seemed to revel in it, darting all over the place sniffing around like a bloodhound, which she was not. In fact she was of some indeterminate mix breed and, according to Monchiero, these were the most intelligent and finest truffle hunters.

Suddenly, Lucy barked and started to dig furiously. Monchiero was by her side in a flash, dragging her away from the prize she seemed reluctant to surrender. Our truffle hunter guide handed us a sickle and invited us to get down and dirty and dig out the treasure. Carefully, we jabbed at the earth and pried the ugly lump of exotic flavors from the ground. Monchiero dropped it into a pocket of his jacket and pulled out a doggy treat for Lucy from another. A quick munch and a yelp of thanks and the pooch was off sniffing the ground once more. We hit pay dirt six times that morning before calling it a day. After saying our goodbyes to Lucy, we headed out for lunch. 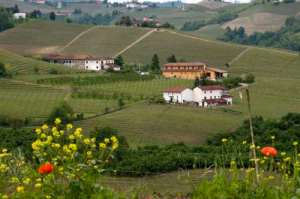 A narrow byroad that traced the edge of a cliff led us into the village of Trezzo Tinella. At the family-run Osteria Vineria Antica Torre restaurant, the ever-smiling matriarch and captain of the kitchen had prepared a special treat for us: pasta garnished with local cheese and just a pinch of truffle shavings. True, truffles are expensive but we felt that she could have been a little more generous with them. As though she had read our thoughts, she assured us (through our guide) that too much would have amounted to overkill.

Accepting her word for it, we tucked into the offering and realized that she was right as exotic flavors danced over our taste buds. It was a meal we savored… deliberately and slowly to drag out the sensation.

4 comments on “Lucy, the Truffle Hunter”